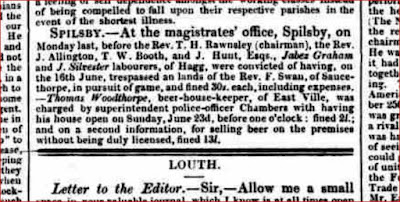 The image above is taken from the Lincolnshire Chronicle, representing an 1850 newspaper cutting giving details of the trial of Jabez Graham who had been caught poaching with a J Silvester. The trial occurred in a magistrates court in Spilsby, Lincolnshire on July 1 1850. The ages of the two men are not given but a Rootschat entry seems to imply that the two men could be cousins. This supposition is probably based on the fact that Jabez Graham (b.1821) in Lincolnshire, the son of William Graham and Elizabeth Taylor, was employed as an agricultural labourer. This fits with the occupation stated in the newspaper article. The other link is the man's companion - a J.Silvester who also was being charged with the same offence.

The Jabez mentioned in the article above had an older brother, Taylor Graham who was born in 1812. Taylor was my direct ancestor, my x3 great-grandfather. Taylor went on to marry a girl from Hagworthingham in Lincolnshire, a Harriot L.Silvester, and it can be assumed that the 'J.Silvester' mentioned in the report was related to her. This connection between the two families may go some way to explain the claim that the two men appearing in court could be cousins. Before this fact can truly be claimed as true however, further research would need to take place into the Silvester family themselves.

Posted by Seaman Family History at 21:16