FAMILY HISTORY - UNEXPECTED CAUSE OF DEATH

Family History - Unexpected Cause of Death

I've recently been researching the Lait family, a branch of my father's family who originated from Lincolnshire and who ended their lives in Liverpool. In particular, I've been looking at details surrounding the life of my great(x2) grandmother, Mary Ann Lait (formerly Graham).
She was born in a tiny village called Raithby in Lincolnshire in 1853. Following her marriage to my great(x2) grandfather, Charles Augustine Lait, the family eventually moved to Liverpool and they had 8 surviving children.

Her death in 1904 was a tragic one, and one which surprised me when the death certificate was actually purchased and received. Instead of finding one of the more common causes for death (such as heart disease, malignant cancers, pulmonary disease and pneumonia etc.), her own was attributed to ‘shock and exhaustion due to burns received by her clothes accidentally catching fire on the 9th instant’. An inquest into her death had been held in Liverpool on 12th January 1904 but I have yet to find any further details about it.

I've since found that this was a relatively common accidental cause of death during those times, (both for adults and children), which is hardly surprising perhaps when you consider the widespread use of open fires, candles for illumination, and lack of flame-retardent materials for nightdresses and clothing in general.

Considering the hardships my great-grandmother must have faced - a country girl who brought her family up within the bustling city, having to learn to survive within basic slum dwellings and yet successfully helping to raise 8 children - to end her life in such a way is a tragedy indeed.

In all my years of researching my family history, I've only ever had goose-pimples twice when I opened an envelope and read the contents. This was the first...
Posted by Seaman Family History at 22:52 No comments:

Details from the 1911 census on the property 5 Bertram Road in Liverpool. A search of Ancestry.com was made after receiving a request from my daughter, who currently rents a flat in the building. She was curious to see if we could find out who actually used to live there during the period when it was a single residential property.

Not only were we able to find out who lived in the house, (William Morton and his family), but also that he employed two servants.

The biggest surprise for my daughter was that the house, now split up into separate flats which are rented out, had 15 rooms in total.

This information was all obtained during a five minute search over a lunch-break in work. It just goes to show what you can achieve in your family history research if you know where to look.

Posted by Seaman Family History at 13:47 No comments:

When researching our family history it is natural that we start to collect the information which is most obviously important for us to get things moving - all the paper documentation we can find; birth and death certificates, marriage and baptism records etc.

We visit our elderly relatives, and have them relate to us the same old stories we might well have heard so many times before. Of course, the difference on this occasion is that we actually want to listen to them, and make sure that we extract every last bit of detail out of the tales of their early lives. Time waits for no man (or woman) as they say, and very often we will reach the point where we realize that the history of our family is important to us all too late, and the best source of our family data may be lost to us forever. During the visit we will undoubtedly sit in rapture on their couch as we listen with intense interest to our relative, nibbling on custard creams while we scribble details into our notebooks and pore over the folder of old photographs we have brought with us to try and jog their memory.

As I said previously such visits are vitally important to our continued research. However, this is not the only type of family information we should be asking about. When I first started collecting my family history data together, I thought that the most important thing for me to do would be to obtain a photograph of as many of the people within my tree as I possibly could. After ten years research, I’m reaching the point now where I can truthfully say that I have almost reached that goal. However, I’ve also realized that there is another, more important archive, which we should not ignore. And that is the archive of sound. 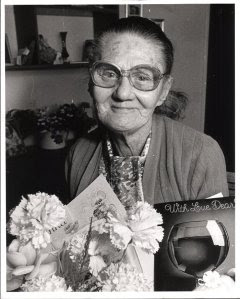 The soundclip above is a short extract taken from an old cassette tape of a Christmas family party in the D’annunzio household in Childwall, Liverpool. It was recorded in 1981 and features Mrs Mary Dunn (pictured), my wife’s grandmother, doing what she loved to do best and singing ‘Lily of Laguna’ at the top of her voice with her family around her. I was one of those present with her on that December evening, playing my guitar and singing along with the choruses. It was a wonderful party and hearing this clip played even now, I can close my eyes and I’m back there again.

In this modern digital age, where nearly all of us has a phone fitted with both a still and a video camera, it is easy to forget that it was not always like this. There was an old thing called analogue - where we recorded sound onto cassette or reel to reel tape, or even directly onto acetate discs themselves.

It should be remembered that some of these items might still be around - tucked away in a shoebox and kept in Auntie Minnie’s wardrobe. You won’t know unless you ask the question… but one thing is certain, you should be asking it now, for neither your Auntie Min nor the tapes will be around forever…

In part two we'll take a look at what you can do with your discs and tapes once you've tracked them down....
Posted by Seaman Family History at 19:06 No comments: