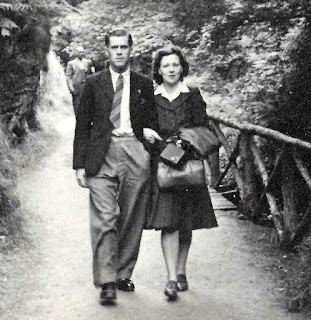 Out for a stroll on an overcast Sunday afternoon perhaps?

I found this undated photo in the collection of my aunt, Elizabeth Welsh after she had passed away.

The young couple is Arthur Teese (b.1918) and Edna Irvine (b.1921) - and they are taking a walk through an unidentified park, possibly one of the local ones in Liverpool.

The family connection to the two of them was through Edna, who was my mother's cousin.

I remember the couple fondly from when I was young, and I recall how my brother and I would need to be on our best behaviour during their visits.

Edna would act as if she was a stern school-mistress. Gary and I would have to tidy the toys up in our bedroom prior to them arriving, just in case she decided to inspect our bedroom to see if it was untidy. Arthur, on the other hand, would follow along behind his wife... cheerily calling me 'Haircut' and showing me the hair-clippers which he had hidden away in his jacket pocket. He'd walk past us and give us a friendly wink, and then pull a face and throw us a gurning smile, leaving my brother and I doubled up in stitches laughing.

I can't recall seeing this photo prior to finding it in Betty's archive a couple of weeks ago, but I'm so glad I found it. It brought back nice memories for me of the couple - especially to see them so young and apparently carefree together.

A lovely couple... and a nice photo of them both to treasure.
Posted by Seaman Family History at 20:55 No comments: 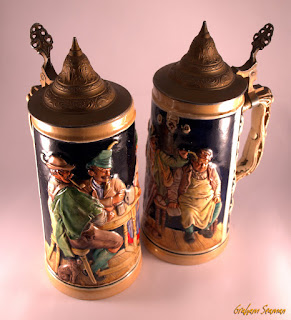 Focussing on examples of some of the family heirlooms this week.

In the photo are two German beer steins given to me by my Dad before he passed away.

He was left them by his uncle, William Laite, whom he became close to after his mother died. Bill was in the Army and the rumour was that he brought them home after a posting over there.

They are lovingly kept as heirlooms pride of place in our french dresser now. 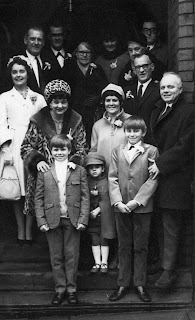 This is the kind of photograph we each have in every family album. The wedding of my cousin, Michael Webster, at St Gabriel's church in Toxteth in the late 1960's. And as with many of those photographs, there are faces I remember and can identify, but also faces which I cannot.

In the shadows at the rear, I can see my uncle Arthur Teese and also my Aunt Betty, mum's sister. I can't identify the man standing at the back on the far right, although his face appears to be familiar.

Moving forward is my grandmother Elizabeth Welsh (nee Englebretsen), standing toward the centre of the photograph. As to the elderly lady standing to her left or the taller gentleman on her right, I have no clue as to who they are.

The smiling man on the right wearing the glasses is my uncle, Johnny Erlis, who used to drive the goods trains up and down the Dock Road in Liverpool. The lady in white on the left of the photograph is again familiar to me, but I have no evidence of her actual identity.

And then comes the group I'm most sure about.

My Auntie Ann - Hannah McAulay (nee Irvine) - is in her trademark 'ocelot' hat and coat and has her hand on the shoulder of my brother, Gary Seaman. The woman standing next to her in the trendy 60's hat and coat is my Mum Joan Seaman (nee Welsh), while my Father, Charles Seaman, is standing on the right. Finishing the list off is my younger cousin, Tracey McAulay, who is standing between my brother and myself.

The church and doorway are still there to this day, as evidenced in the photograph from Google Streetmap below. Indeed the church doorway showed up on television relatively recently as a couple of scenes in the popular television biopic 'Cilla', starring Sheridan Smith, were filmed nearby on the steps in Yates Street. Knowing the area relatively well I recognised it at once. 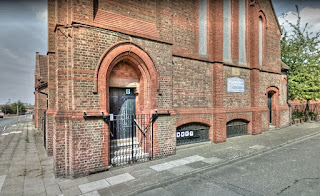 Hopefully, there will be a postscript and an update to this story at some point, as I intend to take the photo down to show my Mum when I visit her later today. I have all my fingers crossed that she will be able to identify a couple of the other people featured in the photograph.

For me, this is not just another photograph of an ordinary family wedding. I see it as an opportunity to possibly fill in some gaps in our family tree and maybe expand, even just a little, on the story of how we all grew up in Toxteth in Liverpool.

Posted by Seaman Family History at 11:50 No comments: