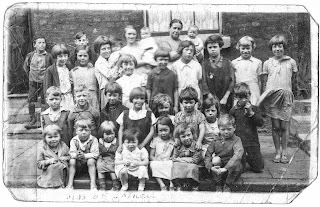 The above photograph, specifically set up by the photographer, shows Frances Midwood Erlis (nee Walter), pictured in a street in Toxteth with a group of the local children. Frances is the older lady standing on the back row holding a small child, near to the centre of the window. Frances was born with the surname Walter in 1880 in Liverpool. She married her husband Thomas Erlis, on 5th August 1901 in St Gabriel's church, Toxteth Park. The couple went on to have 10 children together.

At least three of the youngsters pictured in the photo can be said to be members of the Erlis family, identified from other photographs we have of them in our possession.

Someone has written on the base of the picture 'Kids of Gaskell Street'. Gaskell Street was situated between Park Road and Mill Street in Toxteth, just north of Essex Street. The couple's home was near Hughson Street where I lived with my own grandparents in my formative years (see map below). 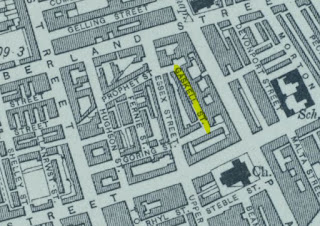 There is no date on the photograph of the children itself, but we can estimate that it was taken at some point during the mid-1930's, just prior to the second world war breaking out in 1939.

Following the outbreak of the war, the Erlis family were living at their home in number 12 Gaskell Street. This property was damaged after it sustained a direct hit from a German bomb on the 6th May 1941, and Mrs Erlis lost both her legs during the attack. She was to spend the rest of her life in a wheelchair until she finally passed away in 1950.

Tragically, their daughter Lilian Midwood Erlis (b.1923) was killed during the same air-raid. She was just 18 years of age at the time. Lilian is pictured in the above photograph standing on the back row of the children, second girl from the left.

Further details of Lilian's story can be found on a separate post <here>.
Posted by Seaman Family History at 21:28 No comments: 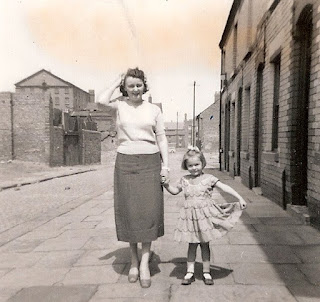 A photo, taken on my Grandad's Kodak 'Brownie' camera, of my aunt Betty and cousin Lilian in Hughson Street, Toxteth.

Taken in the mid-1950's, it shows the two of them standing in the sunlight outside my Gran and Grandad's house at number 25. I lived in the house up until the age of seven and I remember both it, and the surrounding area, very well indeed.

To the left of the photo are the remains of a coal merchants property; the large 'court' properties which used to stand along here had now been demolished to make way for new housing to be constructed.

In the background stands a large warehouse on Northumberland Street. The docks were not very far away from Hughson Street, and this type of warehouse was a common sight around the local area. Some of the warehouses still remain to this day but are now being used for other purposes, such as up-market apartments, gyms, restaurants and nightclubs.

Just to the right of my cousin's head is Prophet Street, again featuring the same two-up, two-down houses similar to the ones we lived in on the right of the photo. This was where Lilian lived with her parents - John and Martha Erlis - in number 13, opposite the sweet shop on the corner of Prophet and Fernie Street.

Apart from the people, lots of good memories of growing up in that street come flooding back to me when I look at this photo. For example, I used to have races with my mates around the blocks of houses on my first two-wheeler bike. I also recall the sound of the horse and cart of the rag and bone man-- his voice calling 'any old cloth, any old iron!' as they trundled along the cobbled street at walking pace, a group of kids running along behind.

I also remember playing with those gas pipes which entered the houses alongside the front door. They were bound in black cloth tape and sealed with a tar-like paint which used to melt in hot weather. We'd sit outside in the sunshine, pulling and twisting the tape into sticky shapes with our fingers. Nearly always receiving a telling off from the adults when they saw we had sticky tar all over our fingers and clothes!

These small memories of happy times were all triggered by looking at that photo.

Even the simplest photograph from a family album should be treasured, because behind each one of them is a story just waiting to be told...
Posted by Seaman Family History at 10:41 No comments: 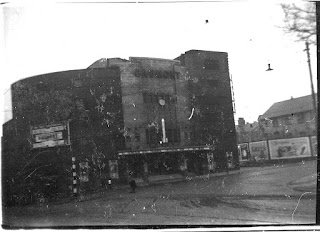 This tiny photograph, heavily underexposed and covered in scratches, gives a view of the Gaumont cinema on Park Road, Princes Park.

The photo was taken by my father, Charles Seaman, during the period when he was working in the building as a cinema projectionist, employed by the Rank Organisation who owned the cinema itself.

As well as the tram lines set into the road and the black and white 'Belisha' crossing pole to the left, the photo is notable for a large 'space rocket' which has been fitted to the roof of the canopy over the main doors. Above the rocket is suspended something which looks suspiciously like a TV satellite dish, but if one remembers that the photo was taken during the 1950's, this explanation would be highly unlikely. I believe it is more credible that the round object is part of the advertisement package and represents the Moon, or a planet such as Mars or Venus, to tie in with the space rocket which stands beneath it.

As I mentioned in one of my other posts on the blog, it was common for the film companies to advertise their productions by sending out items which tied into the films they were about to show. Unfortunately, the wording on the posters around the building in this photo are unclear, but it is likely that the two items had been placed there to advertise one of the big technicolour science-fiction feature films which were coming to the Gaumont.

Several likely movies can be brought to mind - 'Destination Moon' (1950), 'The Day The Earth Stood Still' or 'Flight to Mars' (1951), 'War of the Worlds' (1953), 'This Island Earth' (1955), 'Forbidden Planet' (1956), 'From the Earth to the Moon' or 'Missile to the Moon' (1958). I'm thinking that it could even be an advert for 'Have Rocket, Will Travel'-- a 1959 comedy film featuring three of my childhood favourites; Curly, Larry and Moe-- the Three Stooges. Perhaps not. But unless someone else can come up with a positive answer for us, then this might forever remain to be a cinematic mystery for the family.

The canopy probably wouldn't have been big enough and they would all have had to be tied onto the roof!

Posted by Seaman Family History at 10:48 No comments: 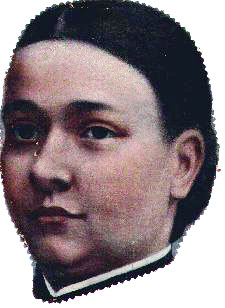 This is the one and only photograph of my g/g-grandmother, Elizabeth RICHARDSON, who had been born in Barony Parish, Glasgow in 1838.

Elizabeth was the daughter of David RICHARDSON, a shipwright by profession, and Victoria VERUE (also referred to at times in certain records by the surnames VALUE and VEVIESER).

The photograph, approximately six inches tall, has been coloured by hand and is mounted on a stiff cloth backing.

According to information from my aunt who gave me the image some years ago, originally it had been much larger and was mounted in a dark wooden oval frame. She recalled it being a head and shoulders portrait which had hung on the wall of my grandmothers home in Hughson Street, Toxteth.

Unfortunately, during WW2, the terraced house next door took a direct hit from a German bomb during an air raid. Luckily our family remained safe, tucked away in the brick and concrete air raid shelter which had been built in the rear yard of their house. But their home itself did not escape unscathed. Its windows were blown out and the photograph and its frame were blown off the wall by the blast. Other possessions of my grandparents were either damaged or looted from their home after they had been forced to move out while the house was being repaired.

Years afterwards, my aunt cut away the damaged parts of the image-- trimming the photo down to its current size with a pair of dressmakers pinking shears-- leaving it decorated with a serrated edge.

Of course, I would have loved to have seen the full portrait of my great-grandmother in all its glory, but considering what had happened to it following the air raid, I consider myself extremely lucky that we have any of it left at all.

Posted by Seaman Family History at 08:13 No comments: 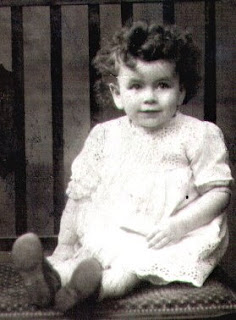 Unfortunately, Lilian Welsh was the aunt I never knew.

She died when only an infant and the only information I had received previously about Lilian's death was that she had fallen in the street, hit her head and subsequently died of meningitis. It was also believed that she had died while in Myrtle Street Hospital, Liverpool.

This information had been passed to me from Lilian's older sister, Betty (Ellen Elizabeth Welsh), but I had no way of substantiating the data until I recently obtained the child's death certificate. However, this record proved that the original information from Betty had been in error.

Lilian had actually passed away on the 22 September 1928 aged only 20 months old. She died while resident at Alder Hey Hospital, in the West Derby district of Liverpool.

The death was reported by her father William John Welsh on 24 September 1928. William was working as a labourer in the Liverpool docks at the time of his daughter's death.

Lilian's cause of death was reported to be by her becoming ill with gastroenteritis, the death being certified by Doctor M.Gudwin.

I can't say for sure how my aunt had apparently misremembered the information regarding her sister's unfortunate death. But Betty had been only three years old when Lilian died, so it is unlikely that she had been aware of the event at all herself. More likely that the details of the death had become blurred for her over time, understandable perhaps when considering that it had been around eighty-one years since Lilian had passed away.

Lilian's death was undoubtedly a sad loss for all our family, but speaking as a family historian her story is also perhaps a prime example of why one should never accept such information as true fact, and should take it at face value only-- at least, until such time as there is hard documentary evidence to support it.

Posted by Seaman Family History at 23:07 No comments: