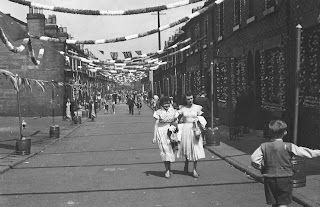 Betty Welsh (right) and her friend Ruby out for a stroll in the sunshine.

There is no date on the photo, but the presence of bunting and age of my aunt
(around 19 years of age) seems to indicate that this was around the time of the
VE day celebrations in May 1945.

The location of the photo is believed to be Toxteth Street,
which ran between Park Street and Harlow Street, Liverpool 8.

Posted by Seaman Family History at 21:52 No comments: 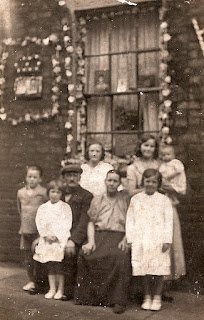 A family photograph of the ERLIS family of Toxteth.

Thomas & Frances Midwood Erlis are pictured sitting outside their home, the outside of which has been decorated to celebrate a royal event -
possibly the Silver Jubilee of George V of 1935.

It was a normal, happy family moment caught by the camera.

But along with many other families who lived in Liverpool at the time, the Erlis' were to suffer tragedy during the Second World War.

On the 6 May 1941 the family home at 12 Gaskell Street, Toxteth took a direct hit during a German air raid.

Their daughter Lilian, seen here standing proudly next to her Mum, was killed as a result of the bombing. She is officially listed among the war dead of Liverpool for 1941. A separate post about Lilian can be found <here>.

But the mother of the family was also badly injured. Frances tragically lost both her legs during the incident, and was forced to spend the rest of her life in a wheelchair - a fact remembered by my own mother.

(photo courtesy of Lilian Wilson and Marion Wilkinson)
Posted by Seaman Family History at 22:17 No comments: 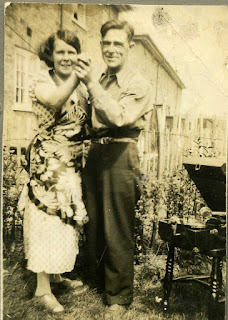 A photo of my grandmother - Elizabeth WELSH (nee ENGLEBRETSEN) - attending a family party at her sisters home in Lordens Road, Huyton.

Pictured with her is her brother-in-law Charles IRVINE, the husband of her sister Hannah.

Charles served in the Great War, although I have as yet been unable to find his war record.

His son Charles was tragically killed on 9th April 1945 at Bari, Italy when a liberty ship (the SS Charles Henderson) was being unloaded and the ammunition on it exploded.

Of the couple's children, the three middle sisters - May, Edna and Hannah - survived. I have fond memories of all three of them, and also the subsequent cousins (their children) who I grew up with.

I asked Mum about her specific memories of Charles Snr, and she recalled that he would often give her half an orange before she had her breakfast when she slept over. "Get that down you...it'll do you good," he'd tell her.

The final star of the photo above must be the phonograph - the handle on the front being used to wind the clock / spring mechanism inside which drove the turntable around and play the record.

I have a few old 78 RPM records of my Mum's in the garage downstairs.

I wonder if any of those were ever played during that happy family party, all those years ago. 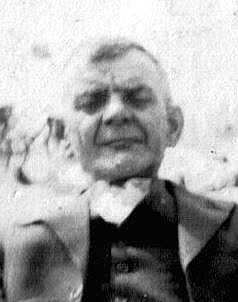 Back once again after a blip of a couple of weeks - hectic family life and a stinking cold are just two of my excuses, but apologies nevertheless!

Anyway. Here we have a photograph of my great-grandfather on my Dad's line - Joseph Frederick SEAMAN.

Joseph was born in the Everton district of Liverpool on the 18 September 1877. He was the third eldest son of Joseph SEAMAN and Mary RAVENSCROFT of North Wales.

Joseph Frederick married Sarah Anne SMITH of Liverpool in St Dunstan's church, Edge Hill on the 15 April 1900.
After what appears to be quite a long and happy life, in which the couple had at least ten children,  Joseph finally passed away on 17 June 1958 in Newsham Hospital, Liverpool. He died of congestive cardiac failure.
Posted by Seaman Family History at 06:00 No comments: