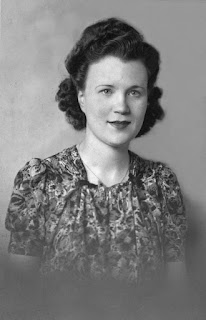 From today, the title of these posts are going to change. I'm moving the focus away from them being 'Friday' photos to 'Family' photographs instead. The past few weeks have been a bit frantic for me for a number of reasons, and I've found it impossible to keep to my weekly posting schedule. Hopefully, doing this now, I should be able to remove some of the pressure and leave me with a little less guilt than I have been feeling of late!

The post today gives details of my great-aunt, Muriel Frances Seaman, who was related via my paternal side of the family.

1920 - Muriel Frances Seaman was born on 1 Nov 1920 in Liverpool, Lancashire. She was the fifth of six daughters born to Joseph Frederick Seaman and Sarah Ann Smith, my paternal great-grandparents. Only one of her sisters was younger than herself - Daisy - who was born in 1922.

1939 - In the 1939 register Muriel was found to be living with her parents, at their home in 4 Lily Grove, Wavertree. As well as Joseph and Sarah, her brother William and sister Daisy were also in residence. On the original register entry, her name had been given as Muriel F Seaman. This surname had been crossed out however, and the name 'Holmes' entered, with a date of marriage being written alongside of 3 January 1945. Muriel's occupation at the time that the register was taken was given to be a 'general office clerk'.

1944 / 1945 - According to the marriage indexes, Muriel married Dennis E Holmes in the 4th quarter of 1944. This is contrary to the evidence of the note made on the 1939 register entry which states that their marriage date was 3 January 1945. This fact is also confused by the fact that she featured on the Electoral Register for 1945 by her maiden name of Seaman. The actual marriage certificate would need to be ordered to try and resolve this discrepancy.

1944 / 45 - The couple were reportedly married in St Cyprian's church, Edge Hill, Liverpool. The church itself is still standing, although it has now been converted into a modern block of flats for student accommodation.

1944 / 45 - Married Dennis Edwin Holmes in Liverpool on 3 January 1945 (evidenced by a note made in the 1939 register). The couple went on to have at least three surviving children.

2006 - Records were found in the Death indexes stating that Muriel passed away on the 13 November 2006. She was 86 years of age when she died.

Both Muriel and her sister Daisy were known to my father, Charles Seaman during his lifetime. He went to visit them on a number of occasions, although sadly I can't recall if he ever took my brother or I to meet them. I know that at least one of them used to live in Woolton village quite near to where we live now, in Cavell Close, which is off School Lane in the village, although unfortunately I now cannot be sure which sister it actually was.