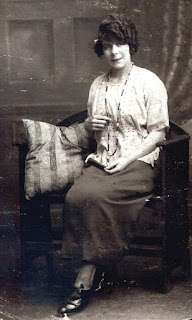 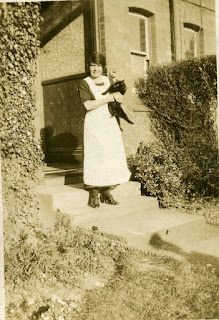 The first photo shows her photographed in a professional studio in Liverpool. It is estimated that she was around nineteen years of age when the photo was taken, which-- with Elizabeth's year of birth being 1895 --would put the date to be around 1914.

In the second photo, my grandmother is pictured standing on the steps of one of the large houses she used to serve. It is believed that she worked with an agency who provided service staff to families - for example, cooks, maids, cleaners, housekeepers etc. My aunt also informed me that she had been directly employed to at least one family as a general maid.

The houses were said to be those in the Princes Park area of Liverpool, which at the time were owned by prosperous businessmen and their families.

I'd love to be able to trace the property itself and see whether it is still there.

Posted by Seaman Family History at 20:46 No comments: 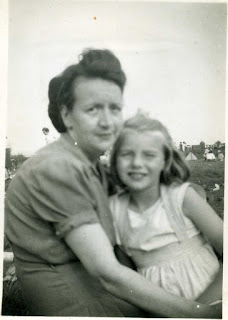 Martha (b.1912) was the youngest daughter of my Norwegian great-grandfather, Peder Gerhard INGEBRETSEN and his wife Elizabeth DOUGLAS.

Like her two surviving sisters, Hannah and Elizabeth (my grandmother), she was named ENGLEBRETSEN at birth, as this was the Anglicised version of the surname which her father adopted in this country.

Martha and her husband, John Frederick ERLIS (b.1913), lived in Prophet Street in Toxteth, Liverpool 8 with their family - daughters Marion and Lilian.

We only lived around the corner in Hughson Street and I remember the family fondly, our two families growing up, remaining close and sharing many happy times.

Posted by Seaman Family History at 00:30 No comments: 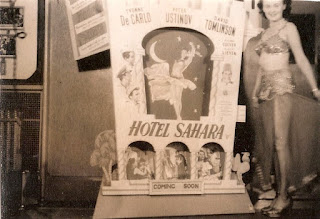 A photo of my aunt, Betty Welsh, dressed in a skimpy costume and standing next to an advertising board which stood in the foyer of the Gaumont cinema, Princes Park, Liverpool.

It was common during the 1940's and 50's for such advertising to be seen, giving details of movies which were 'coming soon' to the cinema chain. Local advertising companies would sometimes be called in to create the items, which might then be passed on from cinema to cinema.

On whose idea it was to dress my aunt in a skimpy costume, I have no information at all. I only found this photo after she passed away and we were sorting through her effects.

For all movie fans out there, the film itself was released in 1951 and starred Yvonne De Carlo, Peter Ustinov and David Tomlinson (see link below). 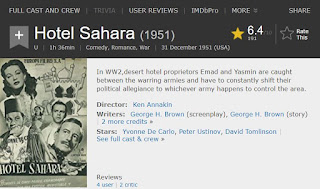 I might see if I can get hold of it, buy some popcorn and enjoy a night at the movies!

Posted by Seaman Family History at 07:45 No comments: