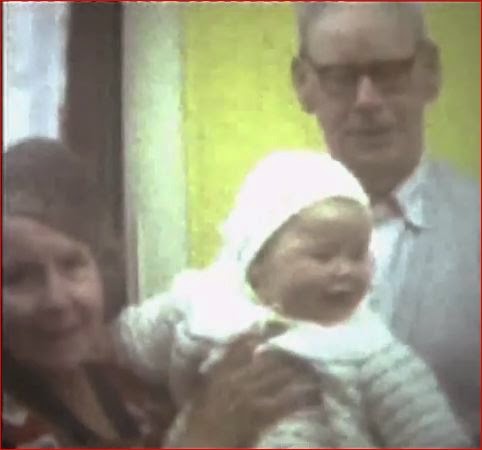 This is a short segment of converted movie film showing some of our family in Hughson Street, Toxteth, Liverpool. As well as seeing a few of the family themselves, there are also glimpses of the area around my gran and grandad's house, with Northumberland Street at one end, after passing Prophet Street just seen on the right. Toxteth Street is at the other end, across Park Street which led up toward our school.

The film was shot around 1965 / 1966 and you can clearly see the 'bommies' - those empty spaces where houses once stood before they were blasted by the German bombs which fell during the war. One of them lies alongside our own house, the bomb falling as my Mum and parents sheltered in their bomb shelter, which stood in the yard just to the left of where my grandma was standing in the above photograph. My very existence being saved by a mixture of pure chance as to where the bomb fell, and also a few layers of sturdy brick.

Finally there are some shots of the cobbled streets, new housing being built and also our own back-yard - whitewashed to make it look as sparkling as the washing Gran used to hang on the line.

Mr brother Gary playing my plastic 'Beatles' guitar, and also myself - on the same toy drum-kit I played on March 1st 1966 while sitting in front of their black and white TV, watching a broadcast of the Beatles live from Shea Stadium.

This is just a short glimpse of our lives back then... I only wish I had more.

Posted by Seaman Family History at 19:56 No comments: