Sitting at the desk in my hotel room, checking over various bits of research material I've gathered together, I had almost reached the point of deciding to head off to bed. But before I did I decided to make one final random search to finish off the night…

As the name of my Lait family was fresh in my mind I went for that one, typing just two words into the Yahoo search field of a new browser window - ‘Lait coachbuilder’. The search returned a few interesting references which I took a note of in my ‘things to do list’, but nothing I specifically recognised. In the browser there was the facility to search for images as well as text, and this I did next - amending the search string to read ‘Diss coachbuilder’. I watched in amusement for a few moments as the search returned a great many photographs of car bodies, carts, coaches and buses; all in various stages of disrepair - the majority looking as if they had all seen better days. I scrolled down the page and yawned, almost reaching the point where I needed to pack up the laptop for the night and get off to bed, when my eye spotted something on the page - a small image of an old postcard which had been for sale on eBay in 2012, a street scene… and one which I recognised well.

The location was Mere Street, situated in the small Norfolk town of Diss. It was a photograph of a place I was familiar with, for I had walked ‘virtually’ down the street many times before while conducting my internet research, using Google street view. I had also physically walked there myself on one memorable occasion, taking a small diversion when on my way home from visiting a customer site in nearby Suffolk in my day-job role as an I.T. Consultant.

I’d learned about the location only that same afternoon following a visit I’d made to the small museum in the town. The museum was open but deserted at the time, save for a solitary gentleman who was acting as custodian… sitting quietly by the door, greeting any visitors, and thanking them if they offered any voluntary donations. Diss is a town primarily involved in agricultural pursuits, and so I spent around ten minutes soaking myself in the atmosphere of the place, finding a varied collection of artifacts and memorabilia of a country township which had long since gone. A great many photographs adorned the walls. Old possessions and ephemera formerly belonging to the townsfolk lay beneath dusty glass cases on the tabletops, potentially untouched by humankind for many years. I wandered slowly around the single long room, hardly daring to hope that I would find anything recognisable which would actually connect me to the town, until I spotted two old town directories in the far corner of the room. 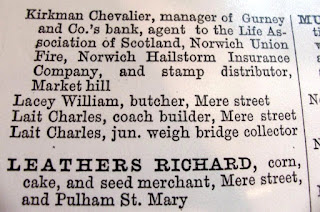 I opened the books in turn, seeking out any references to any of my forbears, and then I found it - ‘Lait Charles, coach builder, Mere Street’. To say I was overjoyed and excited at finding this information would be an understatement, and my pleasure was further multiplied after the custodian told me that Mere Street was where the town museum was located, and I was actually standing in it!

I followed his directions and left him to explore the location he indicated at the far end of the road. There I found the Mere, a small lake which the street had been named after, and I was amazed to find that the original workshop buildings were still there even to this day. They had now been converted for use as a bookshop, but the former coach-building premises could clearly be seen. I photographed it from many angles, making sure that I took in as much of the surroundings as possible in order to locate it easily in the future. It is therefore not surprising perhaps that I recognised the site from the postcard, as it had become etched in my memory from just that one visit.

Before I left to make my way home I called into the bookshop to see if they had anything on the local history of the town which would help me in my research into my Lait family. There was a book available which gave the history of the town, and I did indeed find another couple of references to my family within it.


If this example does nothing else, I think it proves the value of going with your instincts when running searches of this kind on the Web, and if the mood takes you then certainly don’t be afraid to make one more attempt before your head hits the the pillow - but don’t get carried away or you just might be still be there in the morning!
Posted by Seaman Family History at 11:44 No comments: