FAMILY HISTORY - THE KINDNESS OF STRANGERS

Thanks to the power of the Internet, and also the kindness of a stranger, I have received this photograph of the headstone on the grave of my 5x great-grandparents, Timothy Lait and Elizabeth Downing.

I had placed a request on the 'Find A Grave' website to ask if someone who lived locally in the small market town of Diss, in Norfolk, could check out the cemetary of St Mary's Church and see if there was an existing headstone in place. My request was answered, and tonight I received this treasure.


The inscription, now rather faded and worn in places, reads:

I have visited the town previously, but I did not have sufficient time available to explore the site on that occasion. Thankfully, a kind soul called Nigel Battley has now answered my request, and posted the above photograph on the website.


Researching your family history can at times be difficult, particularly if there is the small obstacle of distance between yourself and your area of interest. But I think this goes to show that thanks to the kindness of strangers and the power of the Internet, there is always hope that you will eventually find what you're looking for.
Posted by Seaman Family History at 00:00 No comments:

As part of my ongoing task to ‘sort out the garage’, I went through some papers I’d put away in storage for archiving, and found a few of my old school books buried away within them. I’d pretty much forgotten that I had documents, as they were from the very first school I attended which was Upper Park Street school in Toxteth, Liverpool.

Nestled within the neatly laid out rows of terraced housing around Devenport and Upper Park Streets in what is known locally as Liverpool 8, the original school building had been built in 1878 and then extended in 1885. My time there comes a bit later however, and I attended between 1960 and 1965 - just prior to my family moving out to the leafy suburbs of Childwall, where we have lived ever since.

There were two sections to the school - infants and juniors - and I went to both of them when I was little. The external view of the building above brings back memories of the external metal stairways, used to access some of the classrooms. Also the gate - being taunted by my mates when my aunt insisted on giving me a kiss when she dropped me off at school. We also piled out of this regularly during the summer, all climbing aboard a fabulous green and cream double-decker bus to take us to the playing fields at Jericho Lane in Otterspool to play football.


The photograph above also brings memories of the school right back to me. The days were filled with a mixture of learning and play - the teacher splitting us up into groups to play board games, work on specific learning tasks or do ‘proper’ schoolwork - which is where my schoolbooks come into the story.
 
The book above is different to the other two I also have, as the original cover of this one is intact. It has been signed on the outside by the teacher and as can be seen by the photograph below, someone has written the date of the book on the interior ‘Nov 62’. There is also a handwritten note within it from me requesting 6d to pay for a Puppet show later in the week!


As can be seen in the photograph above, the rest of the book contains a mixture of drawings which I’ve coloured in, and also word exercises which the class completed, copying the teachers as they wrote the words up on the blackboards. 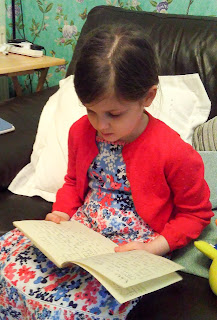 The other two books contain a seemingly random selection of stories and diary entries I have recorded into the pages over a period of time. The above photograph shows my grand-daughter Paige - now 7 years old - reading the words I wrote down 55 years ago, when I was almost the same age as she is now.

After she’d finished, Paige made a number of constructive comments about my writing skills which caused quite a lot of hilarity at the time, but can be summarised into the undermentioned points as follows:

1) “Your writing is SO BIG Grampy! If you made your letters smaller you could fit more onto the page!”

Reading the books now I know exactly what she meant, but I still love the fact that the two of us are able to discuss them in the first place!

Memories of my very first school, now long since gone.

All I can say is thanks to my Mum and Dad for keeping them safe.

Posted by Seaman Family History at 17:59 No comments: