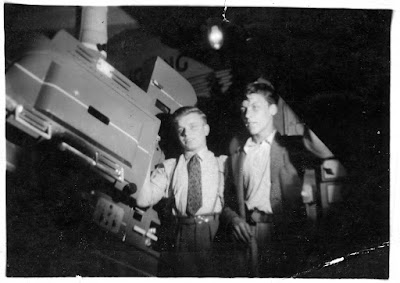 A tiny, grainy photograph of my father and a colleague in their 'office' - a cinema projection room in Liverpool.

Charlie Seaman (pictured left) spent his entire working life working in the cinema's of the North West, and I'm lucky to have a small selection of his photos in our collection to remember him by.

Dad was first employed as a trainee projectionist, aged only 16 years old. He worked initially in the Magnet cinema, which was situated in Picton Road, Wavertree and we have several photographs of him sitting on the roof of the cinema in the sunshine with some of his colleagues.

He went on to work in the Gaumont, Dingle-- along with my mother and aunt-- and I have many happy memories of attending the matinee shows which were played there.

He then went on to work at the Hippodrome in Everton and also the Odeon, Stanley Road, Bootle.

During one memorable Saturday, my father was full of flu and felt awful. He took me into work with him (I was around 16 years old at the time) so I could run the show for him, while he sat at the back of the projection room, reading his newspapers and drinking lots of tea.

During his time working as firstly a projectionist, and then as Chief Projectionist in the cinemas, Dad covered work at several of the key cinemas in the north-west including the main Odeon branches of Liverpool, Southport and Chester.

After more than 25 years service he finally retired from working for the Rank Organisation and obtained a projectionist job in the newly built Studios 123 in Mount Pleasant, Liverpool during the early 1970's.

The picture featured above shows Dad and another operator, identified as Jimmie, standing alongside one of the big projectors used at the Trocadero, Camden Street, Liverpool.
Posted by Seaman Family History at 00:25