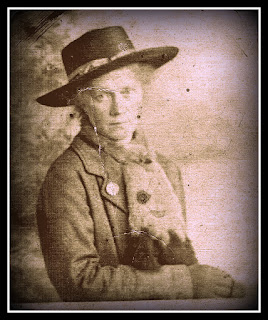 This is photo of my great-grandmother, Sarah Anne Seaman (nee Smith). She is pictured standing against a painted backdrop whilst leaning on wooden railing; an apparently posed shot taken in a photographers studio. Unfortunately, no details of the photographer are shown on the original photocard, which appears to have been cut to fit into a frame at some point.

Sarah was born in 1878 in Liverpool, the eldest child of James Smith and Margaret McCartney.

On the 1891 census her occupation was listed as a dressmakers assistant. She was only 13 years of age.

On 15 April 1900, Sarah married my great-grandfather, Joseph Frederick Seaman in St Dunstans Church, Edge Hill, Liverpool. She was 22 years of age, the same age as her new husband.

In the 1901 census the couple were living at 56 Wendell Street, Toxteth, Liverpool; just off Smithdown Road, occupying 4 rooms in their home. There is an existing property in Wendell Street, a former 'two-up, two-down' terraced house which could therefore be the home of my relatives. However, I am still to confirm when these properties were actually built.

At the time the census was taken the couple were living in the property with their first child... Mary Cecily Seaman, who was only one month old. The couple went on to have another nine children between them. 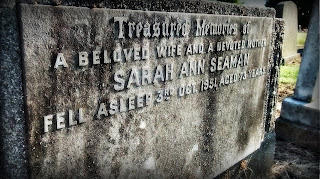 Sarah Anne died on the 3 October 1951 in Liverpool and is buried in a marked grave (above) in Allerton Cemetary, Liverpool.

Posted by Seaman Family History at 23:20 No comments: 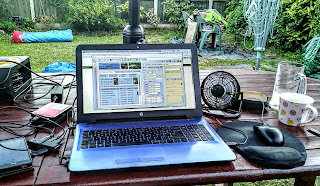 Bouncy castle folded up, M&S loungers on, mug of tea in hand while considering the latest upgrade for Family Historian in the garden at 9pm.

But not before I do a full backup first methinks! ;-)

Three photos for the price of one today, as I was watching a documentary on TV earlier recalling the history of the luxury cruise liner, RMS Queen Mary. The programme was most interesting and told the story of the Cunard-White Star line flagship from her launch in 1936 to her retirement from service in 1967.

During her time at sea, she served as a floating home to the rich and famous. She also carried troops during the war and was a favourite of the British royal family.

But I also recalled that she carried my aunt Betty on a trip to the U.S. from Southampton, UK in 1967, on what would be her final voyage for her owner-company, Cunard. 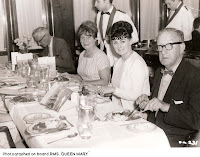 The three photographs above have been taken by the official photographer on board the ship, and show Betty at dinner and also with a member of the crew.

Betty was a seasoned traveller by the time these photographs were taken and had travelled on a number of occasions-- either alone or with her friend Mavis-- on several cruises. These had been either to the Meditteranean and also the U.S.A.

I hadn't realised before looking at these photos after watching the programme, that they had been taken during that final voyage. After the ship left Southampton on 31 October 1967, I'm not sure if Betty travelled only part of the journey or whether she stayed with the ship until it finally docked in the U.S. I'm still researching this part of the puzzle. Unfortunately, my aunt is no longer with us so that I could ask her myself.

I've included a YouTube clip of the great ship leaving Southampton for the final time at the link below. It makes me smile to think that Betty had been aboard when the film was made. 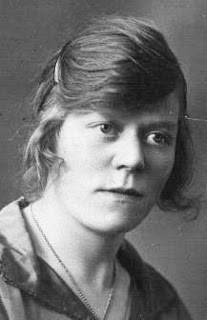 Margaret Eleanor Graham Lait, my grandmother on my father's side of the family, was born in Liverpool in 1901. Margaret was the third child of ten in the family of Charles Graham Lait and his wife, Eleanor Kaye.

MEG, as I affectionately know her, married my grandfather Joseph Seaman in September 1928 in St Catherines Church, in the Edge Hill district of Liverpool. The couple had five surviving children, the sixth-- my aunt, Joyce Seaman-- unfortunately passed away as an infant.

In the 1939 Register, MEG's employment was listed as being 'unpaid domestic duties'-- in other words, she was a housewife in the family home. At the time the record was taken, the family were living in 54 Moorgate Street, Edge Hill... just across the road from the railway station.

Margaret died in Sefton General Hospital Liverpool in October 1947 of heart failure. She was only young at forty-six years of age. 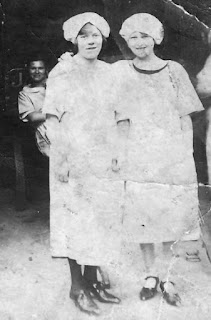 According to information from my uncle, Margaret was employed at one point in her life as a confectionery worker in a sweet factory (see photo above). MEG is pictured here on the left with one of her co-workers. Two things stand out for me looking at this photo-- the first is the highly-polished shine on my grandmother's shoes, and the second is the woman sitting at the rear by the cart, who was basically photo-bombing the couple, around 80 years before the term was even invented!

Finally... the name 'Graham' in my grandmother's name referred to the maiden name of her own grandmother-- Mary Ann Graham, who had been born in 1853 in Raithby, Lincolnshire. And both my parents agreed that I should be named Graham in honour of my grandmother.
Posted by Seaman Family History at 01:02 No comments: 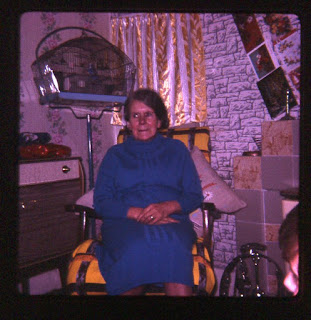 There are a number of things in this photo which bring back memories for me.

The first, obviously, is my gran. In this photograph, which has been taken from a colour negative, Elizabeth is pictured sitting in her favourite chair in the front room of her house-- a two-up, two-down rented property in Hughson Street, Toxteth, Liverpool 8.

I remember Lizzie, (as close family and friends knew her), as being a quiet, loving woman. She would most often be seen busying herself around the house, wearing her trademark 'pinnie'-- either preparing meals for the family or involved with general household cleaning duties. She loved to cook, and I remember standing or sitting beside her in the kitchen, while she allowed me to stick a spoon into a tub of cooking malt or sugary apple pie mix. I would have a smile on my face a mile wide as I sucked and licked the spoon dry afterwards.

But as I mentioned previously, I am reminded of a couple of other things on the photograph too.

The budgie, for a start.

There were three sets of animals in residence in Hughson Street at various times. Budgies, cats and Fred the tortoise (who had an unfortunate end while hibernating in the coal-shed). I remember a green budgie (Georgie-porgie), a yellow one whose name escapes me, and the blue one in this picture-- predictably named Bluey. He was a noisy specimen and can be heard twittering away to himself on a couple of audio tapes I still have. But he also had a bit of a mean streak in him-- and would viciously nip at our fingers if my brother or I were asked to change his cuttlefish bone for a fresh one.

The other memory I have is of the curtain behind my gran, or rather, what the curtain concealed.

There was a shelf built into this alcove and on it, my Dad-- who was well used to working with electrical equipment-- had installed a large valve radio set, and later a gramophone for the family's entertainment.

My Mum recalls that my Dad once fitted a microphone into the amplifier circuits of the equipment. During a family party, my grandad made an announcement through the radio while it was playing music, to play a trick on a relative-- Bridget Price, a cousin of my grandmother.

"Here is an official announcement. Would Mrs Bridie Price please contact the nearest police station. They have information which will be beneficial to her if she attends at her earliest convenience."

Thinking that the announcement was real, Bridie apparently almost fell off the couch in shock and became quite flustered at the thought of having to appear at the police station the following morning. But Mum recalls that everyone at the party had tears of laughter after Grandad's joke had been revealed, none more so than Bridie, who possessed quite a sense of humour herself as I recall.

There is another memory of this equipment... involving a three-year-old, a mains lead, and a pair of nail clippers. But you can read more of this particular tale <here>.