This is the story behind two ordinary family photographs.
For years I had not thought much about them, but then I embarked on this current fascination of looking at the record of our family heritage, and realized that there might be more to these familiar images than I had initially thought.

The first image shows a small group from our family being served a meal in a restaurant. The second is an image of my aunt singing in a bar, with two members of the resident band backing her up. I had the first in my possession already, for it had been mounted in one of our family photo albums. The second was a new find, and one which only surfaced following my aunt’s passing in 2011. The fascinating part for me was the little-noticed legend featured in the bottom corner of both shots - ‘A Middleton Tower Holiday Picture’. It was only after I decided to do a little online research into this hitherto unheard of location that the backstory behind the photos gradually started to become clearer.

Middleton Tower was a holiday camp, situated on the north-west coast in Morecambe Bay, Lancashire. The camp, which originally opened in 1939, was managed by Pontins for the majority of its life until it closed in 1994. The site is now the location of a community of retirement homes. It was the usual practice in such places to employ a ‘house’ photographer - someone whose job it was to ensure that the holiday memories of the visitors of the camp would be captured and recorded. In these days of camera phones, iPad’s and computer tablets it is strange to think of a time when photography was quite an elite hobby, for even if your family was lucky enough to own a camera, (the box Brownie perhaps being the most common), the price of the film itself would be prohibitive for the majority of people. It was for this reason that the holiday camp photographer would be assured of being gainfully employed during their busy periods.

In the first photograph the subjects have been caught just settling down to eat their meal. This may be the reason why the older women, (my grandmother and her sister Hannah), look less comfortable with the situation. All they want to do is to get on and enjoy their food and instead they were being held captive by the photographers lens. The two empty seats in the foreground might belong to two people who were not part of the family group - strangers who vacated their seats temporarily to allow my family to be photographed on their own together - as it was common practice for campers to be encouraged to mingle with each other in such a way. In reality, the photos would be taken at different times throughout the day by the photographer. He or she would walk around the camp, paid to seek out likely suspects who were just going about their business of having a good time, and then talk them into posing for the shutter. After a few hours the photographs would be available for viewing and purchase in the camp shop. Ultimately this was meant to generate income and help with the advertising of the camp, so the photographer would try and ensure that they never took a bad shot - trying his/her best to have their subject posed comfortably smiling, eyes open as the flash went off, so that there would be more chance of the holidaymakers actually putting their hands in their pockets to buy them. The two photographs here have been printed on card, and have a postcard form laid out on the back. This meant that not only could the holidaymaker obtain a happy reminder of their holiday to keep for posterity, but they would also have the opportunity of sending the photograph back home to their nearest and dearest, and let their relatives all see just what a good time they were having during the holiday.

Middleton Towers also had a 2000 seat theatre, otherwise known as the SS Berengaria, which had been constructed in the style of an ocean liner. Also within the building was housed a restaurant, two lounges and a bar. My aunt loved to sing and had a mezzo soprano vocal range which would often be heard during family parties etc. as she entertained us. Betty never pursued music professionally, and so the photograph of her singing into a mike with the house band might have been taken during the ‘talent show’ - a form of live entertainment which would have been popular at the time. While studying the photograph more closely I had noticed a partially visible sign to the top left of the image, having ‘…der Bar’ written upon it. Within the online research material I discovered, I found a photograph of a map of the site, which had been scanned from a copy of the holiday camp brochure that had been previously released in 1955. This clearly showed several bars dotted around the site, (..the Clubhouse Bar, Tudor Bar etc.), and I then spotted an area labelled the ‘Wonder Bar’ within the main building itself.

It seemed that not only had I been able to find out more about the camp itself, but I’d now also discovered the likely location of the place where my aunt had been photographed during her actual performance. I was really pleased in the information I’d been able to find about the camp in the end, as it had moved the story of these postcards forward so much for me. I’d progressed from knowing only the slightest details about them, to now being able to tie the images down to a physical location and learning more about its history.  The ‘devil is in the detail’ as they say. And the story behind every photograph can be discovered if you are lucky, and also look hard enough to find it. I wonder how many other photographs like these lie waiting to be discovered within family albums elsewhere?
Posted by Seaman Family History at 21:06 No comments: 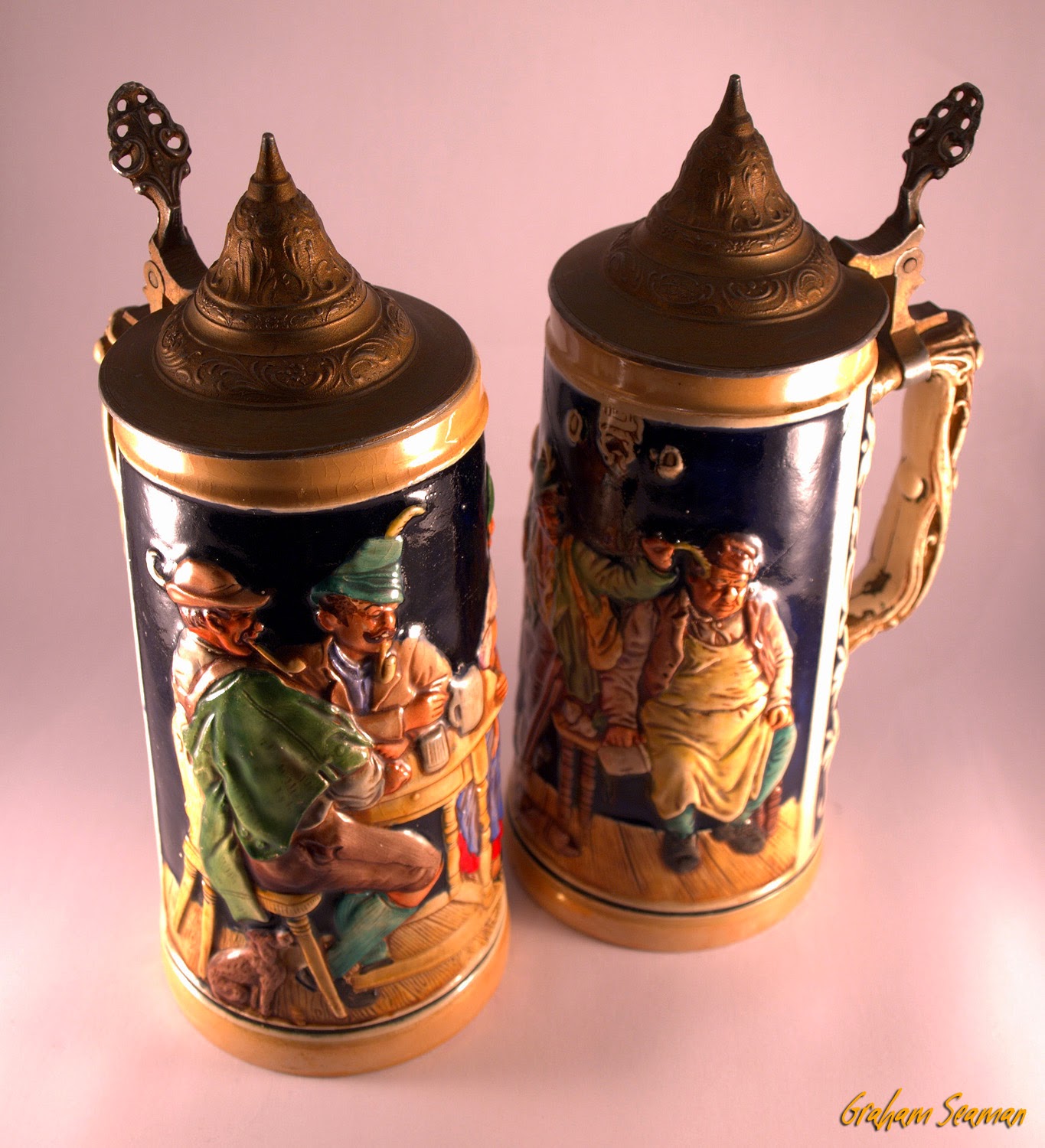 A pair of china beermugs given to me by my Dad before he died.

He was left them by his uncle, William Laite, who he became close to after his mother died. Bill was in the Army and the rumour was that he brought them home after he had worked a stint over there.

They pride of place and are family heirlooms in our french dresser now.

Posted by Seaman Family History at 22:43 No comments: