FAMILY HISTORY - SHE LOVED TO SING!

My Auntie Bet just loved to sing.
She had a decent singing voice which was sometimes compared with that of the film actress, Teresa Brewer, whose movies Betty grew to love.
When we would gather at a family party and the beers had been flowing for a little while, someone would always be heard to say ‘Come on Bet… give us a song!’, after which she would stand herself in the corner of the room and sing out one of her favourite tunes ‘acapella’, to rapturous applause.
But she never pursued this talent in any professional kind of way. As far as I know she only ever sang at private family functions, and the odd performance which would take place during a ‘talent night’ in a pub or club. So unlike Teresa Brewer, there is not much evidence of her singing prowess to be seen out there… until now. 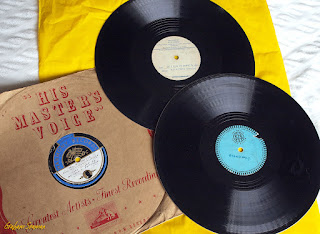 The photograph above shows three 78rpm discs which I inherited from my Aunt after she died. I’d found them stored at the bottom of a drawer unit, wrapped loosely in brown paper and lying together, with only one of the discs being kept in a sleeve. As well as all three being covered by years of dust and grime, the surface of one had begun to disintegrate entirely, with black chips of acetate falling away to reveal the metal disc inside it. Indeed one side of the record had been splashed with white gloss paint at some point in its lifetime, so I’m afraid that this record is potentially too far gone to save. The others however, although slightly scratched, are not too badly damaged and play reasonably well. I have each of the discs now stored individually, wrapped in acid-free paper and plastic archival sleeves, and have begun the process of converting them to digital audio.
https://soundcloud.com/graham-seaman-1/family-archive-my-love-elizabeth-welsh
The audio track above is the first of these, and as the disc showed the least damage of them all, the track has not required much audio restoration to get it to this point.
The song itself is called ‘You My Love’, and is a cover of an original song which had been featured in the 1954 film ‘Young At Heart’, starring Doris Day and Frank Sinatra. The record was recorded live in The Gaumont, Princes Park Liverpool, and features the cinema’s own mighty Wurlitzer organ which was used to accompany her during the song.
The method of recording the sound was both simple and ingenious at the same time.
These were the days just before tape recording equipment became less expensive and therefore popular with the general public, and recordings at that time were being made using discs covered with a thin film of a special lacquer. The engineer would bring the recording equipment out with him during such sessions, and set up perhaps one or two microphones to capture the sound from the different sources (in this case, my aunt’s voice and the cinema organ). The sound would be cut straight onto the disc as they both performed, the recording lathe cutting a groove into the surface of the acetate as the song progressed, and the records could then be taken home and played shortly afterwards.

Betty singing at a talent night at a holiday camp in Morecambe Bay.
Some years ago, before Betty died, I made an initial recording of the tracks and cut them to a CD for her to play at home. It had been done to try and lift her spirits as she had not been well. Her dementia had started to become a real problem for Betty in latter years, and we decided that if we could do anything which would stimulate her memory and perhaps slow down the onset of the disease, then we needed to do it. The quality of the tracks was not perfect, but this didn’t matter for it made her happy to listen to them – this was the first time she had heard the music for many decades. The CD therefore served its purpose and brought back the happy memories and lifted her – if only for a little while.
We played this track during her funeral service in 2011 and I know that it came as a surprise to a few of those people outside the family to hear it, as they had only known her as a frail and infirm woman rather than the fun-loving and vibrant Betty Welsh that we had all known.
So now I’m revisiting this part of my family history, taking each track and digitally cleaning it up using the software I have in my home studio. A few of the others might take a little longer, but i’ll publish them on Soundcloud and on my genealogy blog here as I complete them, along with the other audio archiving I’m currently working on.
Okay. It might be a little bit corny for me to say it, but I think I must.
‘Come on Teresa… move over… just a little bit… and make room for my Auntie Bet.’
Posted by Seaman Family History at 22:02 No comments: