The photograph on the left-hand screen below shows my mother, brother and I standing on the step on my Gran and Grandad’s house at 25 Hughson Street, Toxteth, Liverpool. At a guess I’d say the photo had been taken at the end of the 1960’s. I’d spent the whole of my early life living in the house - a simple two-up, two-down dwelling; with a front parlour and a back kitchen, a yard and outside toilet to the rear. And then, when I was seven years of age, we moved up into the ‘leafy suburbs’… and my Mum and Dad’s first rented property of their own in Childwall.

The property in Hughson Street went back somewhat longer however. The rows of terraced properties had been built around the turn of the century, the small neat houses replacing the slum court dwellings which had been situated there previously. The houses had been rented out to tenants, and although I grew up primarily only knowing it as the home of my Gran and Grandad, I found out later that other families had lived at the address before we did.
The details of one of those families is featured in the right-hand side of the photograph.

For my online family history research I use Ancestry.co.uk when looking for information on the UK census records, and although there is no specific address search on the site one can still search for addresses by using the fields ‘Lived In Location’ and also ‘Keyword’. By just using this simple search criteria I found my record relatively easily by entering ‘Toxteth, Lancashire, England’ into the first field, and then the address itself into the second. Although my search did not immediately return the property I was looking for, it did however return one of the other houses in Hughson Street into the search results and I then used the ‘previous / next’ buttons to scroll through the pages to find the actual address I was looking for.

The census for 1911 shows that the residents in 25 Hughson Street were a 39 year-old widow, Elizabeth Flannigan, and her family. She had two daughters living with her in the property - Margaret aged 21, and Lelly Flannigan who was 18. All three of the women had been born in Liverpool.

However, on the night when the census had been taken there were four visitors to the property. Patrick Flannigan (aged 71) was a farmer from Greencastle, County Donegal in Ireland. This was also the birthplace of Edward Flannigan, a 32 year-old joiner, and John Drummond, a 43 year-old dock labourer. Finally there was yet another dock labourer, James Ennorby, who was also visiting and was listed as a widower. Of course, Patrick and Edward were most likely related to Elizabeth (perhaps they were her father and brother). The relationship of the other two men to their host is not known.

On speaking to my mother about her memories of the house during the 1930’s, she recalls that my Gran and Grandad were renting it from the landlord as far as she can remember, but my great-grandfather Peder Ingebretsen - a Norwegian merchant seaman - had also been living there up until he died in 1933. From that point on, the house stayed with our family right up to the 1970’s when the properties within the area had compulsory purchase orders finally served upon them, and the residents (in our case my Grandmother and Aunt) were moved out. 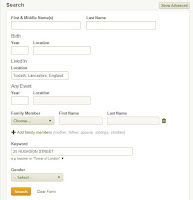 Using the search capabilities of Ancestry in this way has been a most interesting exercise for me, and its been useful to look into the history of a property I can remember so well, and indeed at one time called home. But by ‘walking’ myself through the 1911 census pages in this way, I was also able to find names of other families who my Mother remembered as living in the area later on… such as Thomas and Phoebe Moss of number 21, and William and Annie Black of number 17. This brought her a lot of pleasure as she recounted her memories of what it was like to grow up within the area, and in particular relating to me what she remembered about their other neighbours who lived close by.

All I can say is that it only takes a few minutes to carry out a search such as this. If you have an old property which played a similar role in your own family history, I’d thoroughly recommend you try this method as well!
Posted by Seaman Family History at 22:00 No comments: