Above is a photograph of Felice D'Annunzio and his wife, Mary Agnes (formerly Douglas) with two of their children, dressed in their Sunday best clothes. The photo was taken at the beginning of the twentieth century, probably in Liverpool, during the early 1900's.

It appears to show one of their children dressed as if ready for baptism, the other-- slightly older child-- dressed smartly, his boots polished and shining.

On checking our family records, I believe the older child to be Henry Edward D'Annunzio, who was born on the 10th June 1902 and lived until he was ninety-four years of age. He married a lady called Jane Lloyd, but at present no further details of the family are available.

Judging by his probable age in the photograph, it is likely that the younger child could then be his sister, Maria Eleanora D'Annunzio, born in 1906. She later went on to marry Thomas Fitzsimmons and had at least four children.

Felice was brought to Liverpool by his parents, along with his siblings, after leaving the ancestral home in Atina in Italy. The collective families then established themselves in Liverpool, where some of their descendants still live to this day.

One of his siblings, Filipo (also known as Puche) Annunzio, is the great-grandfather of my wife, Sandra. Felice is, therefore, her great-uncle.

Posted by Seaman Family History at 23:54 No comments:

This is a photograph which has been added to our family record only recently.

I had already written some of the story of my 2nd cousin (three times removed), Private Maurice LAIT, on another blog post on this site which you can find <here>.

But one of the things which was missing from it was an actual photo of the man himself.

I received a message from a researcher who is looking into some of the deceased from 1916, to say that he had found this photo of my relative in the Sheffield Daily Telegraph newspaper.

At the time it was posted he had been listed as missing. It was a plea for information from his mother who was living in Buxton, Derbyshire.

Unfortunately, Maurice was found to have been killed in action on the 1st July 1916.

His name is listed on the Thiepval Memorial in France.

I am so grateful to the researcher who sent me this photograph. I had gathered a fair amount of information about my cousin, but what was missing was an actual image of him.

For this kind gesture, I am extremely grateful.

Posted by Seaman Family History at 23:25 No comments:

Pictured in the back garden at the new house in Lordens Road, Huyton, the three Englebretsen sisters - Hannah, Martha and my grandmother, Elizabeth.

The photo is not dated, but we estimate that it was taken shortly after WW2 ended when Hannah, her husband Charles Irvine and their family were living in a property built in Huyton - in what were then the suburbs of Liverpool.

A couple of other photographs from this day exist in the family archive, and there is no doubt that the family were enjoying a party - there is a wind-up gramophone pictured on one, another shows some of the family dancing in the garden. Unfortunately, the reason for the 'do' hasn't been recorded.

However, my mother fondly recalls visits up to the house with her parents when they lived in Toxteth. At the time, the young teenage girl used to feel that Huyton was 'out in the country', being situated on the edge of the main city conurbation at that time. The area was surrounded by greenery and visitors from Toxteth needed to catch two trams or buses to get up there. It was a house she remembers fondly and with love.

The house was home to succeeding generations of Hannah's and her daughter's family, until relatively recently when my aunt (also named Hannah) passed away.

The house was then sold to a local family, who will hopefully find as much love there as they all did.
Posted by Seaman Family History at 06:00 No comments:

FRIDAY FOTO 1 - JOAN SEAMAN AND THE BOYS IN HUGHSON STREET 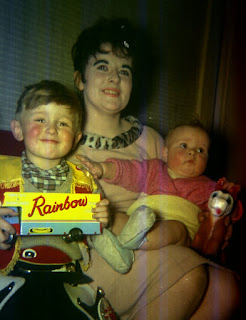 Mum Joan SEAMAN around 1959/1960, with Gary on her knee and Graham holding the lorry. Pictured in a rare colour photo of the time, sitting on the couch in her parents rented home in Hughson Street, Toxteth, Liverpool 8. The house was a small two-up, two-down terraced house in which we were all living at the time.

My Gran and Grandad slept in the main bedroom at the front of the house, while Mum, Dad, Gary and myself slept in the smaller back bedroom. My brother and I would eventually sleep in bunk beds - Gary on the bottom, me on the top. My Aunt then slept downstairs in the front parlour room on a fold up sofa bed.

As if all this was a bit basic, there was also no bathroom in the property. We had to get washed in the back kitchen, after it had been warmed up from the heat of the stove-- or had to take a stand-up bath in front of the fire in an old tin bath. When not in use the bath would usually hang up on the wall outside the kitchen in the backyard.

Finally, there were no indoor toilet facilities in the property. If we needed the loo we would have to go down to the bottom of the yard and do our business in the outside toilet. There was no heating or lighting in the cold brick-built shed. We would need to go down there during the snow in winter or with an umbrella when it was raining.

Not good. Oh...and don't forget your torch whatever you do!
Posted by Seaman Family History at 06:00 No comments: