The above photograph was taken in approximately 1954/55 and features my mother, Joan Seaman, when she worked in the sweet kiosk of the Gaumont cinema, Princes Park, Liverpool.

Mum was an usherette and worked alongside a team of other girls, and they all shared duties and took turns serving the cinema customers from the sweet kiosk. In those days apart from selling ice-creams, chocolate bars and drinks, you could also buy cigarettes to smoke while cuddling up to your loved one on the back row!

The short audio clip below describes my Mum’s memories of working in the kiosk, together with some of the more unwelcome visitors she used to have to deal with……

THE GAUMONT - CHOCOLATES AND COCKROACHES - (audio clip)
Posted by Seaman Family History at 21:44 No comments:

Toward the middle of last year, when the 100 year commemorations into the start of World War 1 took place, I started running searches on the internet to see how many of my relatives I could find who had served during the conflict. I ran individual surname searches, beginning with the UK Medal card index which was available on Ancestry.co.uk. Following my search of the surname ‘LAIT’ (my paternal grandmother's side of the family), the name Maurice Lait was returned, and I realised that he could be a match with my own family connections. 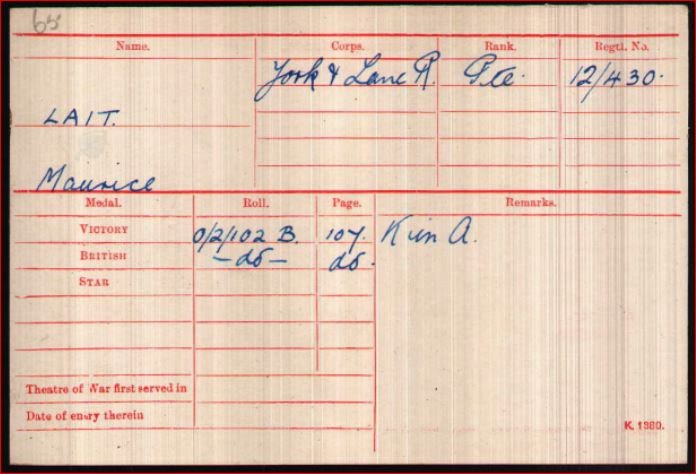 I had only scant information about Maurice at the time – an approximate date of birth and his death given as 1916. However the more I began to search and dig into the archives, all the more information was revealed to me.

Maurice Lait was my second cousin, 3 times removed. He was born in Blaby in Leicestershire, a small village to the south of the city of Leicester, in approx. 1888 to his parents, Alfred and Emily Ann (nee Morris) Lait. Maurice was the middle child of at least three in the family - he had two sisters, Ann (born in 1885) and Ivy (born in 1891).

I found the family on the 1891 census, and Maurice’s age was given as 2 years old. The family were living at number 12 Portland Road, Knighton in Leicestershire. Like Blaby had been previously, Knighton was a suburb of Leicester at the time. I searched for Portland Road on Google maps and found that is still in existence today, but the property mentioned above has now been replaced by offices / flats. 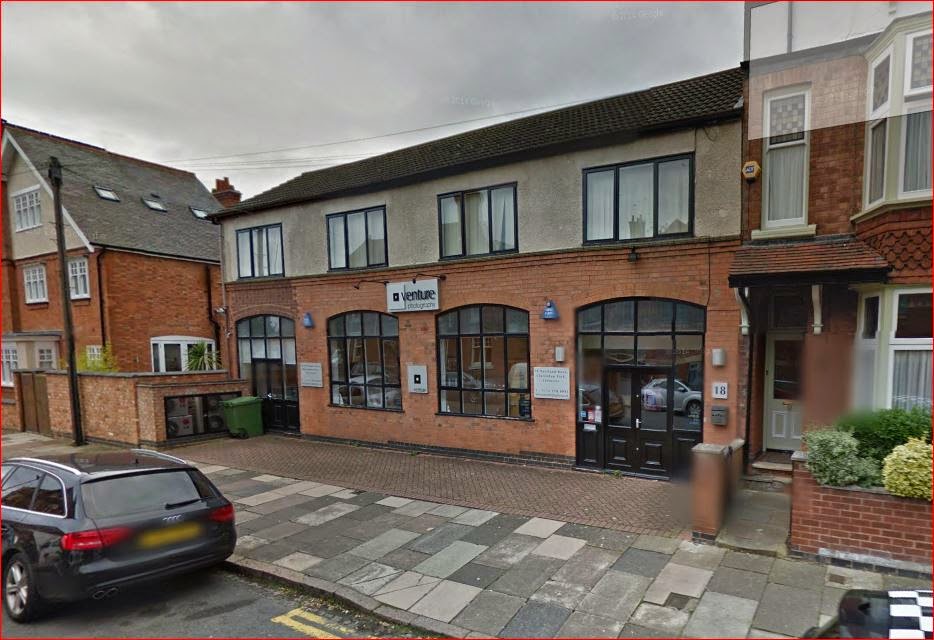 On the date when the 1891 census was taken, Maurice’s father Alfred was aged 36 and was stated to be a commercial traveller. Alfred’s birthplace was said to be Diss in Norfolk, the small market town where my Lait family had their original coach-building businesses.

Maurice’s mother Emily Ann was given as 40 years old, and her birthplace was given as Wellington Street, West London. Both of his sisters, Ann (written as ‘Ana’ in the census), and Ivy respectively were 6 years and 1 month old. Also in the property were Annie Isabel Chapman, a 13 year old domestic servant, and Harriet Shaw, a 58 year old widow who was a nurse.

Ten years later, when the 1901 census was taken the family were living at Scarbow Villa's, Fairfield Road, Buxton. Alfred was still employed as a commercial traveller aged 46... Maurice's mother was now aged 50. In 1901 his sister Ann was now 16 years old, and was training as a pupil school teacher. Maurice himself was 12 years old (his given name had been written ‘Morris’ by the enumerator), and his younger sister Ivy was 10 years old. There was also a new domestic general servant in the property, a lady called Judith Broomhead, and she was 60 years old.

In 1914 it was recorded that Maurice joined the York and Lancaster Regiment (12th Battalion), and his short service attestation papers were located on Ancestry.co.uk. His regiment number was 12/430.

Maurice was 25 when he first joined the regiment. He joined in Sheffield as a Private on 15th September 1914. In his service record Maurice was described as being 5 feet 6 inches tall, and weighed 140lbs. His complexion was fair, his eyes grey and his hair brown. The examining medical officer stated that he had no distinguishing marks (tattoos, birthmarks etc). His religious persuasion was stated to be Church of England.

The 12th Battalion (often known as the Sheffield City Battalion) was formed in Sheffield on 5th September 1914. In May 1915 the men were based firstly at Penkridge Camp in the midlands, and then went to Ripon in July and finally Salisbury Plain in October that same year. During this period the men would have undergone intensive battle training of various kinds in order to prepare them for what they would face on the battlefield. Finally, on 20th December 1915, the battalion was moved to Egypt to serve as part of an expeditionary force until 9th March 1916, before it was finally relocated to Flanders in France from the 10th March of 1916.

Maurice was only in France for a little over 3 months before he was unfortunately killed in action in Flanders on the 1st July 1916. He had been just 26 years old. Following his death, his service papers gave his home address as 64 Starcourt Road, but as yet I have been unable to find out where this might have been. The records also confirmed his father Alfred Lait as his next-of-kin who was living at ‘Oakfield’, Sylvan Cliff, Buxton. This road still exists at the time of researching this data (2015), but the actual property itself has not been identified.

There is evidence in his service papers that Maurice's personal effects were sent back to his father to the address in Buxton on 15th August 1917. Furthermore, in 1920 the UK WW1 Medal rolls recorded that Maurice was eligible for the Victory Medal and also the British War Medal for his services to his country. 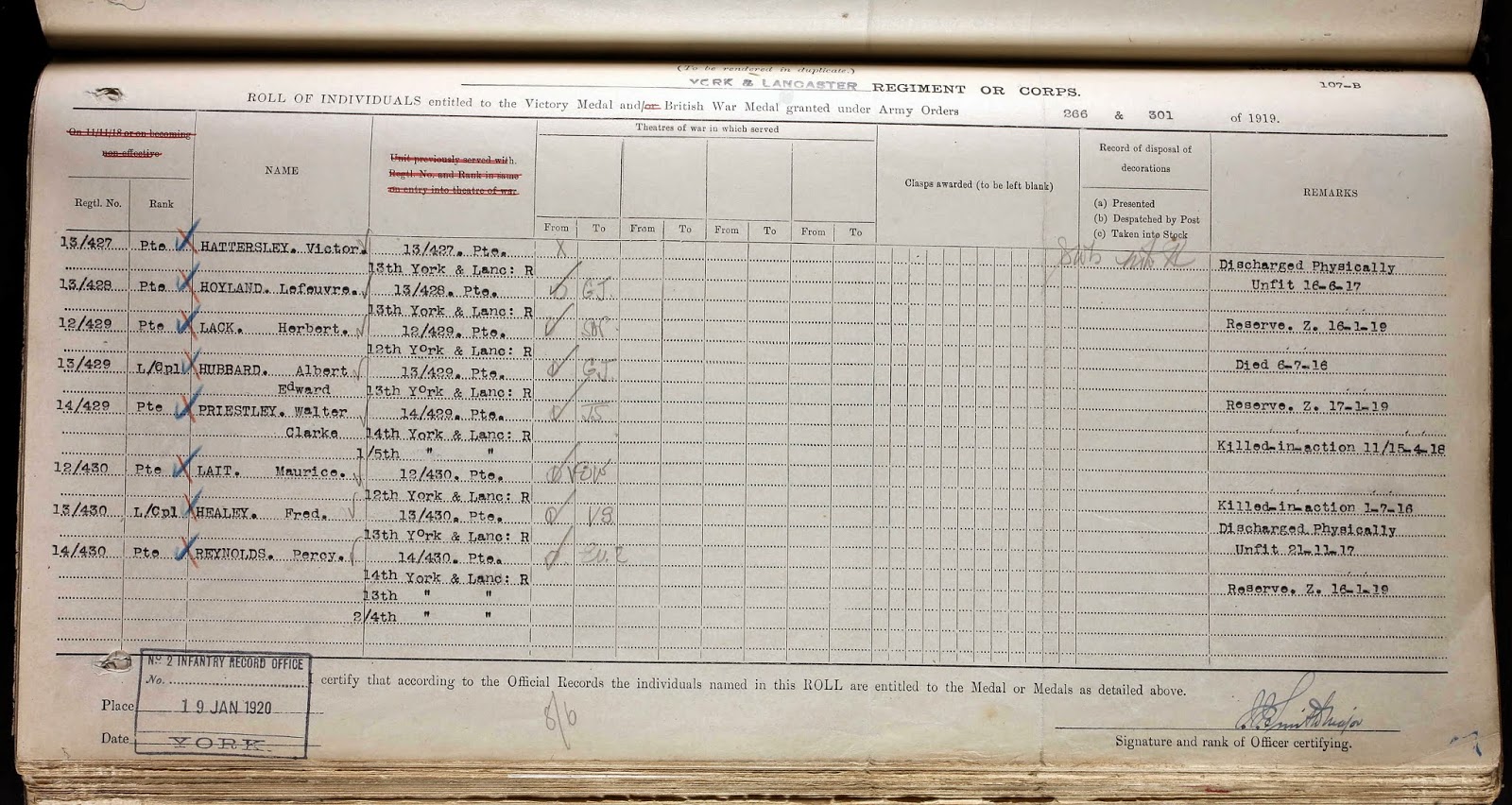 Maurice’s death and burial was recorded in the records of the Commonwealth War Graves Commission (CWGC). His name features on the Thiepval Cemetary memorial in the Somme. A commemorative plaque in PDF format was found to be available on the website (see below). 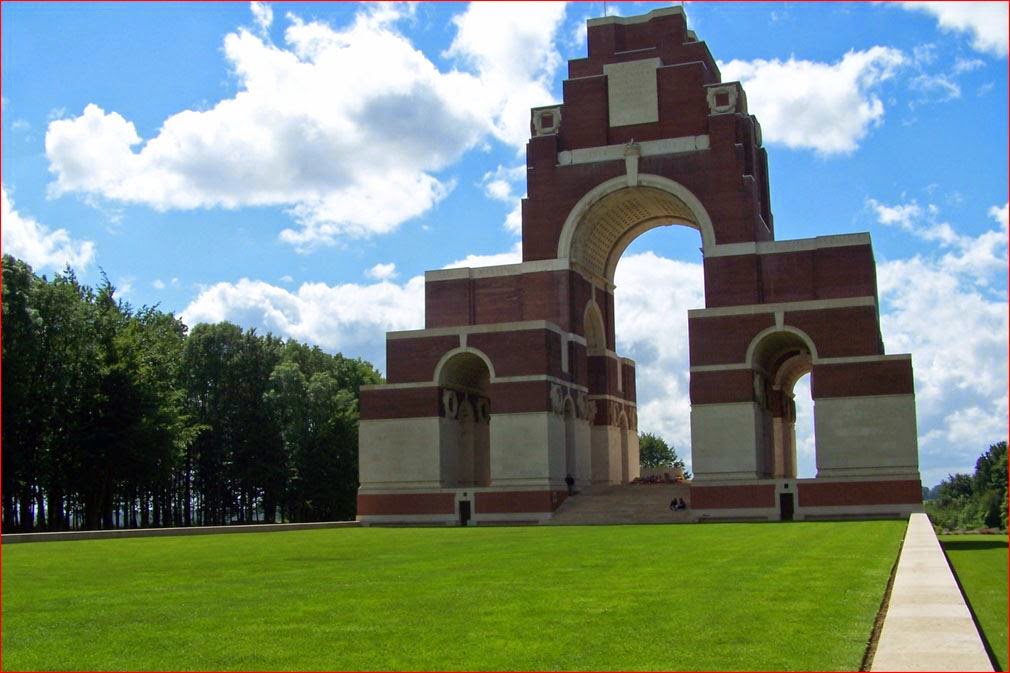 Capturing the moment when I first realised that I had proven the identity of at least one of my family members, who had recorded a list of names and dates into our family bible.

Prior to finding the book hidden away at the bottom of a wardrobe in my mother's house, I had previously very little information about my connections to the Lait family, save for an unconnected list of names compiled from the internet. On the inside pages of the book a list of names and dates had been written - both of birth and of death - and it is thought that at least three different members of my family compiled these lists. The identity of these people was not known and could only be guessed at, that is until the other day when the photo above was taken.

Comparison of both images clearly shows that the section highlighted was written by the same hand which had completed the census form... the signature on the form being Charles Graham Lait... my great-grandfather.

The discovery of this information was a revelation for me personally, and proves to underline the often repeated advice for the family researcher to 'keep on digging.' It is true that the varied tales from our family history are many, and this seems to prove that there are always new discoveries to be made, laying just beyond sight around the corner!